Makawao in Upcountry Maui feels laid-back and trendy at the same time. This is the town of cowboys, galleries, interesting shops. It’s a great place to wander for a morning or an afternoon. The people seemed genuine and friendly and when it was time to look for a lunch spot, we picked a place with a generic-sounding name—Market Fresh Bistro.

Located at 3620 Baldwin Avenue, tucked in an area behind the Viewpoints Gallery and a charming walkway and courtyard, this bistro was one of our favorite finds during a week in Maui. 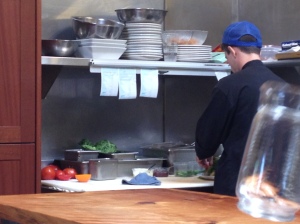 The food here is organic, unbelievably fresh and prepared simply, ensuing that the ingredients shine. When we ordered a salad for our lunch, we sat in awe as we watched the kitchen staff carrying in the fresh greens and other produce for our meal. The freshness of the local produce and fish we enjoyed that day were unbelievable. 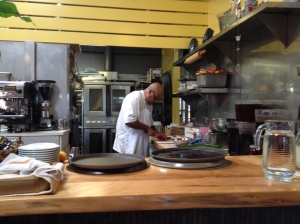 The soup was interesting and flavorful. With fresh fish as an option to top a salad, the lunch felt healthy, fresh and light.  The presentation was beautiful. I only wish I could prepare a salad so beautiful at home. 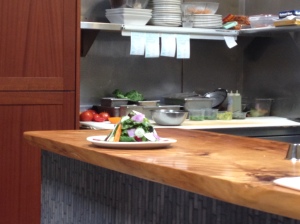 Our service was friendly and casual. We enjoyed a glass of wine and a leisurely pace as we admired the creations being made before our eyes in the open kitchen.
Market Fresh Bistro’s garden-fresh ingredients left us longing for something similar in our neighborhood at home.  If only we could get produce this fresh year-round.
This bistro is locavore heaven. Highly recommend. Next time we’ll try the dessert.

When we discovered that there was a dairy on the island of Maui, I could hardly believe our good fortune. After all, my favorite food groups are the three Cs: chocolate, cabernet and cheese. So, after a morning of watching the sunrise at Haleakala National Park, and a tour of a lavender farm, we drove to the Surfing Goat Dairy in Upcountry Maui.

Surfing Goat Dairy produces and sells award-winning cheeses and offers visitors on Maui a variety of tours. The people we met were welcoming and seemed to truly love their jobs. 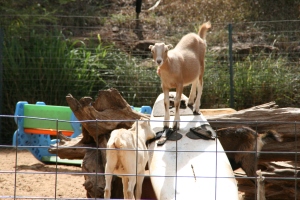 We took a casual tour, which for a fee of $10 included a personalized tour of the entire operation. We were able to see the goats, feed them, view the milking and cheese-making areas and taste a variety of the gourmet goat cheeses.

The first impression of this dairy is how well these animals are lovingly cared for. The dairy is Certified Humane Raised & Handled, which means that they don’t use any pesticides or herbicides and the goats have resting areas, shelter and sufficient space to engage in natural goat behaviors. They also name each goat in the herd after birth. Plus, as a bonus these goats get to live on Maui. German expatriates Thomas and Eva Kafsack own and operate the dairy. We learned that they moved to Maui more than a decade ago after leaving their previous professions. He led a software company and she taught high-school German in Germany. They brought with them the knowledge gained from visiting dairies throughout Germany, Austria and France.

The goats are milked twice a day, and then the milk is immediately pasteurized at a temperature designed to ensure that the vitamins are not harmed. It is then cooled down quickly for the cheese making. After adding organic cheese cultures and a vegetable rennet, they produce three types of cheeses: soft cheese, fresh chevre and quark, which is a European-style cheese also known as fromage blanc and has a consistency between yogurt and cream cheese.

The chevre cheeses were delicious and we found these cheeses frequently on the menus of many Maui restaurants. The list of hotel customers is impressive and includes the Ritz Carlton Kapalua and the Four Seasons in Wailea on Maui, the Four Seasons Resort Hualalai on the Big Island and a number of mainland hotels such as the Peninsula Beverly Hills and the Arizona Biltmore Hotel. The best surprise was a gourmet chevre called Men’s Challenge, which won a second place National Award in 2004 and would be a perfect substitute for horseradish for a holiday meal. The fruit quark was made with fresh organic fruits such as Kula strawberries, lilikoi and apple bananas. The aged Maui gourmet goat cheese comes in tempting flavors such as Napa Wrap (fresh chevre wrapped in grape leaves), MacGoatNut, Swedish Heart (caraway seeds in black cheese wax) and French Dream (herbes de Provence, in white wax). Their feta, plain and ripened five months in brine and olive oil, won a first place National Award in 2006. 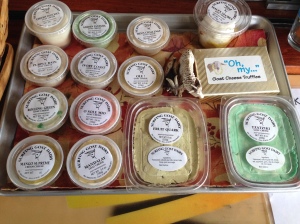 Oh, and did I mention that they also make gourmet goat cheese truffles in flavors like toasted coconut, lychee, lilikoi, Hawaiian chili pepper and lavender?
From Kula, Surfing Goat Dairy is located 3.6 miles down Highway 37.

Cooking with a Wallflower
LUX Mag

My Food And Flowers

Two of the Great Joys in Life!

News and reviews of made on Maui products and Maui-based companies and success stories. Also featuring island shopping guides

The Diary of a Retiree

An adult's guide to long-term travel

We're the other Hilo Farmers Market, the one with parking!